As Dr. Longo prepares for the Birkebeiner- here is a introduction to amazing race! 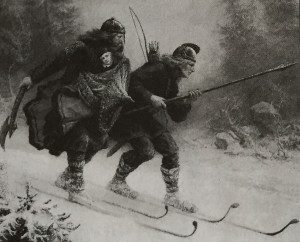 The year was 1206 and Norway was in the midst of a civil war when Birkebeiner skiers, so called for their protective birch bard leggings, skied through the treacherous mountains and rugged forests of Norway’s Ostendalen valley, smuggling Prince Haakon, the son of King Sverresson and Inga of Vartieg, to safety. The flight took the Birkebeiners and prince from Lillehammer to safety in the town of Trondheim. Ina of Vartieg never became the queen as the prince’s father was killed before he could return for her in vertigo. Norwegian history credits the Birkebeiners’ bravery with preserving the life of the boy who later became Norway’s King. Harken Haakonson IV and forever changed Northern Europes’ history by his reign.

The story and painting of the flight were the inspiration for the first Bierkenbeiner ski race held in Norway in 1932. To this day, Norwegian skiers still carry a pack, symbolizing the weight of an 18-month old child, in the Worldlopper’s Norweigian Birkebeiner Renner race.